Found out about the Whaplode riot of 1482 today, which took place in the grounds of the St Mary’s where I’ve been photographing recently. The grounds are more of a cottage garden than a graveyard, which the villagers plant and tend. There are no oppressive yew trees, and this time of year there’s a wonderful array of colourful and casual blooms lining the pathway to the Church entrance and framing the ancient stone. In the 15th Century the Abbot at Crowland was responsible for collecting Whaplode’s local taxes. When these were not used to make urgent repairs to St Mary’s the villagers asked if they could chop down the trees in the grounds and use the wood to make the repairs themselves. When the Abbot refused the villagers rioted, kidnapping the Abbot’s local steward and taking axes to the trees. So there may well have been Yew trees at one time! Hundreds of years later the Whaplode villagers still have a very real relationship with and responsibility for this place. 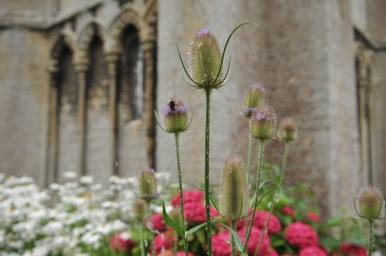 The grounds of St Mary’s, Whaplode

The grounds of St Mary’s, Whaplode